ALL EYES ON “The Willis Way”

Alone, you are caught in a ferocious rip current sweeping you out to sea. Your knowledge in escaping deadly rip currents swiftly comes to bear, and you will happily live to see another day.

Ask the average beach-going person, “Are rip currents dangerous?” The answer more often then not will be a resounding “Yes!” Then ask an experienced surfer the same question and you will find each surfers’ response will differ, as many variables factor in the development and potential severity of a rip current—seasons of the year, tidal shifts, wind, waves, ever-changing ocean bottom conditions and geologic structure of each beach you surf or swim at. 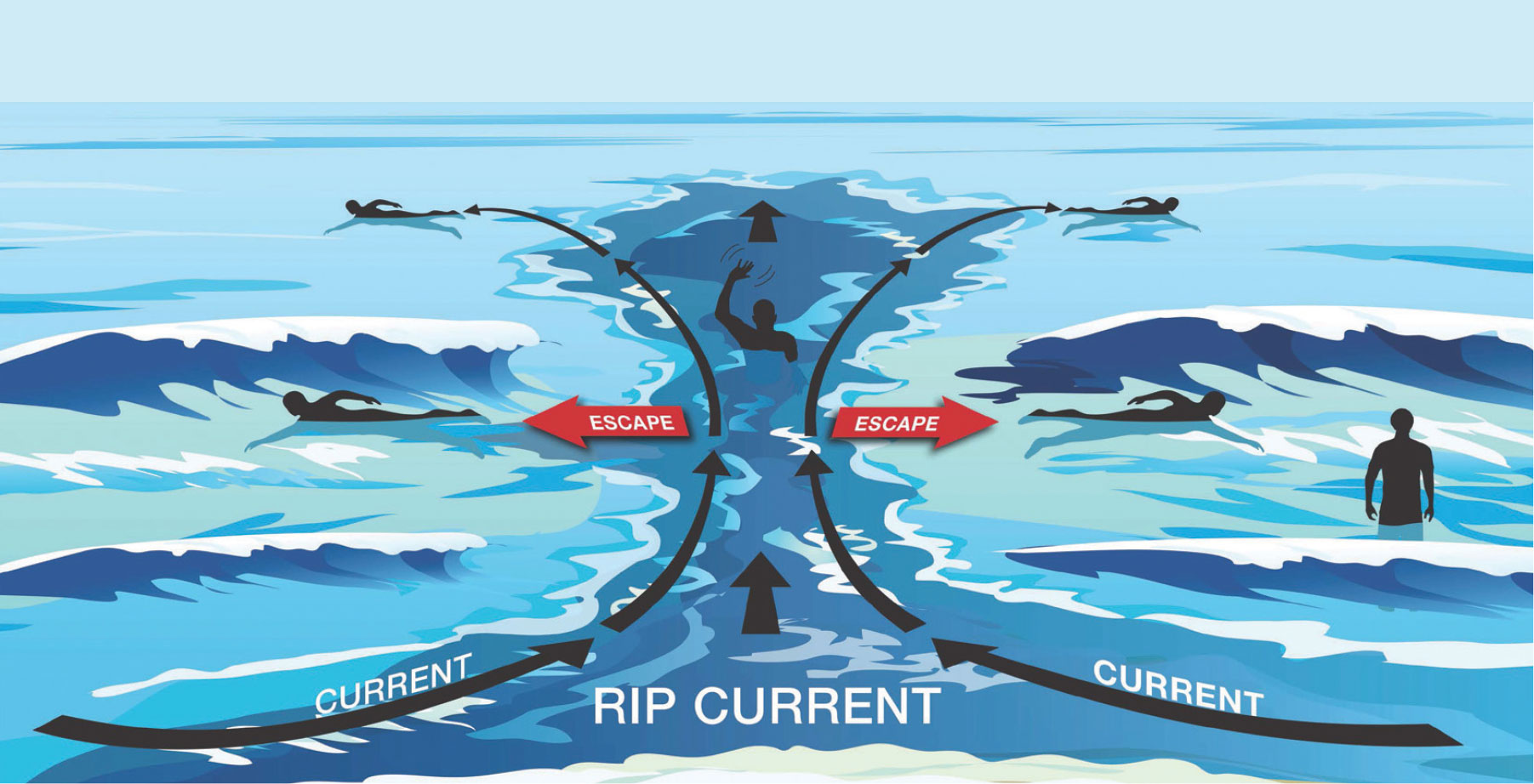 Simply put, rip currents are created by surf and gravity. Once the surf pushes water up the slope of the beach, gravity then pulls it back, creating concentrated rivers of water moving offshore and alongside the incoming surf. Rip currents pull continuously and they can suddenly appear or intensify after a set of waves, or when there is a breach in an offshore sandbar.

Ask the average beach-going person how to properly escape a rip current and their answers will vary significantly. Some will say, “Yell for help,” and others will say, “Just stay out of the water.” The most common answer—and one that is advocated by the California Surf Lifesaving Association (CSLSA): “If caught in a rip current, try to relax. A rip current is not an ‘undertow’— it will not pull you under. Do not try to swim against the current as this is very difficult, even for an experienced swimmer. If you can do so, tread water and float. Call or wave for assistance. You can also try to swim parallel to shore until you are out of the current, then swim directly toward shore.”

What is tricky in CSLSA’s online advice is: In which direction parallel to the beach should one swim in order to recognize direction of the rip current and proper escape route? Even an experienced swimmer will have a difficult time, especially under duress, recognizing which way the current is running and therefore, which direction to swim in order to escape. This is a fickle issue and as mentioned earlier, many variables come into play in recognizing and escaping rip currents. Depending on each individual or organizational training and methods of lifesaving, all will have different opinions on proper protocol. City, county and State lifeguards have their strategies; pro surfers have theirs and the Willis Brothers have their methods too.

Local twins, Milton and Michael Willis, both internationally recognized world champion giant wave surf riders and fearless lifesavers, publicly advocate common sense ocean safety by educating swimmers before being caught in life threatening rip currents—to swim in with the waves, thus saving your life or possibly the life of another beside you.

The Willis Bros maintain there are only three ways a swimmer can effectively escape the ‘Grip of the Rip’ 100% of the time:
1) With the aid of a jet ski;
2) A helicopter lift; or
3) “Swim in with the waves!”

When interviewing SoCal lifeguards on the Willis Bros method of swimming in with the waves as the only way to escape a rip current, most agreed the Willis Way is feasible, but not in every situation. They strongly maintained their position that on any given beach, on any given day of the year, ocean conditions change and therefore every rip current situation should be addressed separately.

Even though the Willis Bros and public lifesaving officials may differ in opinion on the most reliable methods of escaping and surviving a dangerous rip current, both will categorically agree upon the following:
ALWAYS USE COMMON SENSE!

If you have any doubt about your ability to handle ocean conditions on any given day, don’t go out alone. Find a buddy to surf or swim with and if possible, swim at a guarded beach. If you have any question about which direction the current is running or the existence of a rip current in the immediate area, search out the Willis Bros, an experienced surfer, a lifeguard or whomever you trust for solid advice. Use yer bean!

DON’T ATTEMPT TO BE A SURF HERO, even though your GoProHero3+ high-def goanywhere camera begs to differ. You definitely don’t want your last will and testament coming down in the form of a video clip of you and Davey Jones sharing a shot of rum from his rickety locker on oceans bottom. As a side story in full support of “The Willis Way” in escaping a rip current, I must relay this one personal incident in which I could have easily lost my life on the Southeast coast of the Big Island of Hawaii.

It was early spring of 1970. I had met a great surfer down there named Stan. He shaped his own boards he labeled Rock Island Surfboards. We both worked nights at a pizza joint called The Kau Kau Place in downtown Hilo. Crazy days! The first southerlies began striking the black sand beaches of Kalapana and a smoking reef break the locals called ‘Drainpipe’. After work, Stan and I would travel down to camp at Harry K. Brown Park by Kaimu Bay. At first light, we’d hit the surf. On our first trip, I was very inexperienced at surfing Hawaiian style waves and Drainpipe could be extremely intimidating. It took time getting used to as the sets would jump up like jolly dark giants, then explode like depth charges on the reef. So beautiful was the danger—plus these waves broke in the middle of the ocean—impressive sight!

We were the only surfers out that morning. Pointing out the line-up, Stan warned me not to take off too deep. So what did I do? The first wave I paddled into I took off too deep! The bottom of the wave dropped out faster than a hippie boy on his way to Haight-Ashbury. The entire ocean opened up below me, exposing its jagged guts. I didn’t even have time to scream out “Hare Krishna!”

My board immediately disappeared. Looking toward the beach, the boiling ocean atop the coral reef appeared far too menacing to swim across, so I decided my only exit strategy would be to swim away from the waves, then swim into the beach from there. Just as I had made that exit decision, a set of full-on, dark shadowed monsters came crashing in on my head. I didn’t think I was going to survive that onslaught. Once out of the impact zone, I felt much more secure, that is until I realized the beach was suddenly getting smaller!

This wasn’t just a casual California swim to the beach from outside Swamis or Cardiff— much different! To make a long story short, two hours of delirious ocean swimming was my breakfast. What saved me that morning was my youth and strong swimming ability. I finally made it back the beach, still alive at 20 years young and ready to live!

Stan had long wondered where I had disappeared to. He never saw me lose my board nor see me swimming….he saw nothing! After telling him of my ordeal, he strongly reprimanded me:“Whenever you lose your board here, always swim straight in with the waves! You’re lucky you didn’t get sucked down to Tahiti, drown, or get eaten by a shark!”

Had I known “The Willis Way” was my safest way out that day, I would have definitely taken that route. But Milton and Michael hadn’t been born yet and the Willis Way didn’t exist.
Now it does…Yea!!!