In sports and life there will always be politics, but in time, justice always prevails. The following true account of the largest waves ever surfed is proof. Moral of the following true story: Do not wait for an invitation to live your dreams. 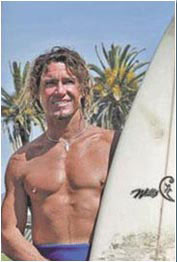 A swell the size of which was never before seen was about to explode on the North Shore of Oahu. A swell so big in fact that the Quicksilver Eddie Aikau big wave surfing challenge would be cancelled due to extreme high surf too big for the professional big wave surfers, lifeguards, contests organizers and the state of Hawaii. A “condition black” was issued officially closing all North Shore beaches thereby making it illegal to enter the ocean this day. This is the first and only big wave surfing contest to be postponed because of high surf.

When the big swell of ‘98 hit, it was bigger and more powerful than anyone could have ever imagined. Surfers, old locals, fishermen, lifeguards – no one had ever seen the ocean waves this fierce, this big, or breaking this far out. As far out as one could see, powerful giant waves were breaking beyond the horizon. Amazingly, the best big wave surfers in the world began protesting against going surfing in the biggest waves to ever come ashore. This Eddie Aikau contest goes down in history as the first and only big wave surfing contest that the world’s best big wave surfers did not want to participate in due to big surf.

Racing down to the beach Willis approached Rarrick about getting into the big wave event. Rarrick personally knowing Willis’ ability quickly responded – “you’re in.” Rarrick turned to write Willis on the official list of contestant’s board for all to see. No sooner had the ink dried when the Eddie Aikau big wave surfing contest director George Downing declared the surf too dangerous and the contest cancelled.

Though one of Willis’ proudest moments was to be included amongst peers in the big wave challenge, when the contest got cancelled it made no difference to him. Willis was going surfing this day, Quicksilver big wave contest or not. A bigger more official superceding contest was about to take place. This was a moment Willis had always dreamed of – surfing the world’s largest waves and becoming the real world champion of big wave extreme surfing. Nothing was going to stop him, every fiber of his being told him — go!

With 60 to 100-foot plus waves breaking on the whole North Shore of Oahu, all of the regular big wave surfing spots were closing out. Mysto spots never before seen let alone surfed, were breaking miles out. From shore, the only outer reef that looked possible to surf and survive appeared to be at outside Log Cabins. Getting out to the waves appeared nearly impossible. First there was a 30-foot shore break to get through which would be followed by non-stop, huge, deep-water tidal waves exploding everywhere.

Willis partnered up with his brother Michael, Sam Hawk and Cheyne Horan. Together they launched directly from Sunset Point right off the beach, weaving in and out of giant waves, back and forth, side to side, in and out, they were able to miraculously reach the outside waves. As planned ahead of time, the Willis brothers Horan and Hawk headed west to outer Log Cabins. Though Horan and Hawk made a beeline for outer Log Cabins, the Willis brothers instead took a detour going further outside of Sunset Beach.

There is no sure way to estimate the size of the behemoth waves the Willis brothers encountered more than a mile outside of Sunset beach, but it’s safe to say these waves were double the size of outer Log Cabins. With Michael towing and Milton tow surfing, the brothers were able to ride three all-time empire state building waves. They were the only ones to surf outside Sunset Beach this day and they did it twice, once in the morning and again in the late afternoon. Milton Willis in this moment rode the largest waves in surfing history, and by doing so, became the real and true world champion of extreme big wave surfing.

After surfing outside Sunset Beach and the largest waves ever surfed, the Willis brothers headed west to meet up with Hawk and Horan at outer Log Cabins. Moore and Bradshaw, having motored up from Haleiwa, arrived at the same time. Horan caught the first wave at outside Log Cabins, but it was Milton who actually caught the first and biggest waves of Biggest Wednesday outside Sunset Beach.

Although the legendary session – Biggest Wednesday, January 28, at outside Log Cabins is accepted by many surfing scholars as the largest waves ever surfed, the fact remains the waves surfed outside Sunset Beach this same day were bigger. Milton Bradley Willis is in fact the real and true extreme big wave surfing champion of the world. The next extreme big wave world champion has to ride a wave bigger than Milton Willis’s epic Biggest Wednesday at outside Sunset Beach. Good luck.

The real and true extreme big wave tow surfing champion is Milton Willis who had a dream to surf the world’s largest waves. He worked hard, remained loyal to his passion and then became that champion. Like Milton Willis, you enter the contest of life when you dare to dream unrealized possibilities and turn them into realities.

Standing the test of time, it’s been close to twenty years since Milton B. Willis along with Michael C. Willis opened up the doors of GIANT WAVE SURFING ! There has not to this date  been another CODE BLACK (WAVE conditions deemed to LARGE to humanly surf). Milton B. Willis remains the WORLD CHAMPION of the LARGEST WAVES ever SURFED.